Contrary to popular opinion, gold and silver are not hedges against a crisis. In fact, a crisis may cause all salable assets, including precious metals, to be sold in order to get cash.

At Dohmen Capital Research, we believe a good recent example is the 2008 global crisis. Gold plunged 31% as credit tightened, the crisis accelerated and a rush to cash from all assets commenced. That was painful for bulls who didn’t know that a credit crisis causes all assets to plunge. But it also created a great buying opportunity at the bottom. Here is the chart of the gold ETF during that time: 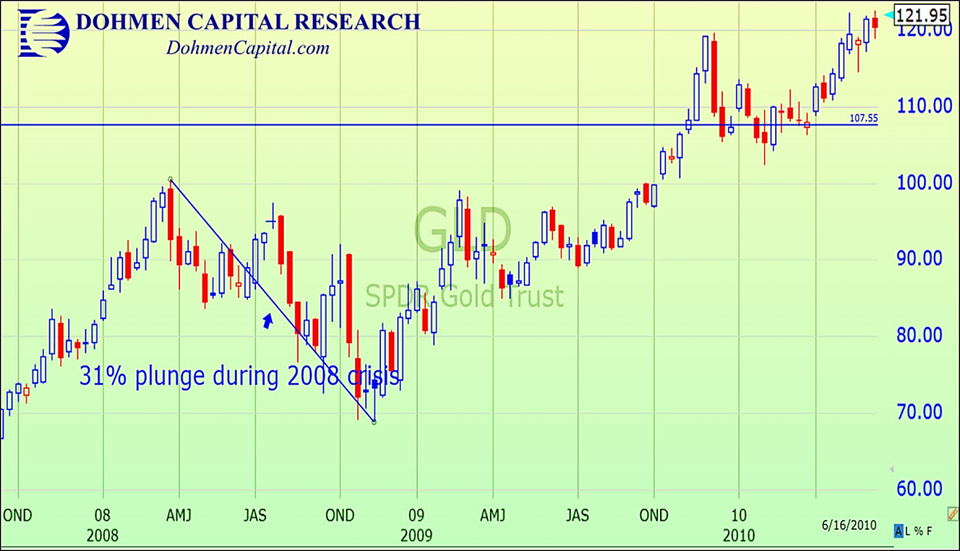 Gold investors must realize this to protect themselves in times of crisis. Cash in the form of a stable currency is the most desirable asset to hold during such times.

However, crises cause the central banks to step on the monetary accelerator, which then makes gold a great investment as you can see on the chart above. That bull market in gold went from late 2008 to late 2011, three years. As our motto says, “timing is everything.”

Gold has been widely ignored since 2011 as an asset class for institutional portfolios. However, that should change as most other asset classes deteriorate and become unattractive for a while.

What is bullish for gold? My opinion is that gold is primarily an inflation hedge, actual inflation or the perception of future inflation, as currencies are debased by governments that can’t pay their bills.

With long-term bullish sentiment on the precious metals so low until late 2018, and the gold price in terms of many foreign currencies already near or at new record highs, it’s only a matter of time before the U.S. dollar price of gold shoots upward. Although the very short term may see more of a pullback, the long-term factors are very constructive.

In 2018, bullish sentiment for gold and silver was at a multi-year low. Very few people were interested. That’s usually the time to take a fresh look, technical and fundamental. If everything lines up, my analysis would go against the bearish majority.

The chart below shows the exposure to gold of managed money in gold futures and options (green line). It shows that the allocation to gold was at its lowest point on this chart in October 2018, at least since 2006. Also important is that in spite the extremely low interest in gold, the gold price (yellow line) in 2018 was higher than at the gold low in 2016.

I call this a very important long-term, bullish divergence.

Looking even longer term–20 years–the chart below shows the “non-commercial” short positions. These are the speculators who are usually wrong at the important turns.

The fact that speculators, i.e. non-commercials, had record short positions in 2018 confirms that a lot of short covering may occur, to be followed by actual buying. That would mean greater demand. 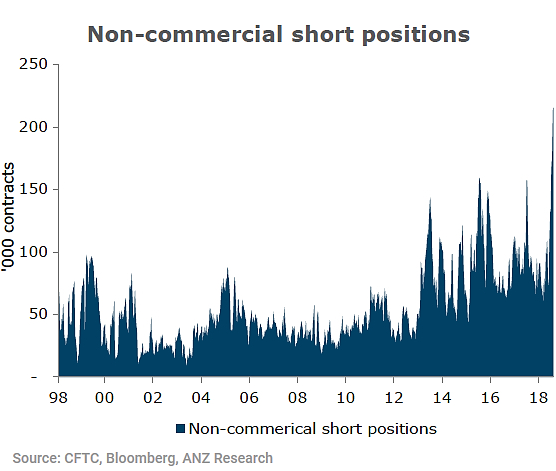 The bottom in the precious metals has been forming since early 2016. As you can see from the chart below of the ETF for the gold miners, VanEck Vectors Gold Miners (GDX), it had a quick rally that year and then went into another sideways pattern until January 2019. Now the chart appears to be getting ready for a stronger up-move

You can see that a long, bullish potential inverse “head and shoulder” pattern has formed. If a breakout occurs, it would mean that the early 2016 low was a false downside breakout on a major (longer-term) scale. Such breakouts usually have very strong moves in the opposite direction, in this case upward. The chart below of the gold bullion price (monthly) is bullish. The bottom of the “cup” has been forming since early 2016. 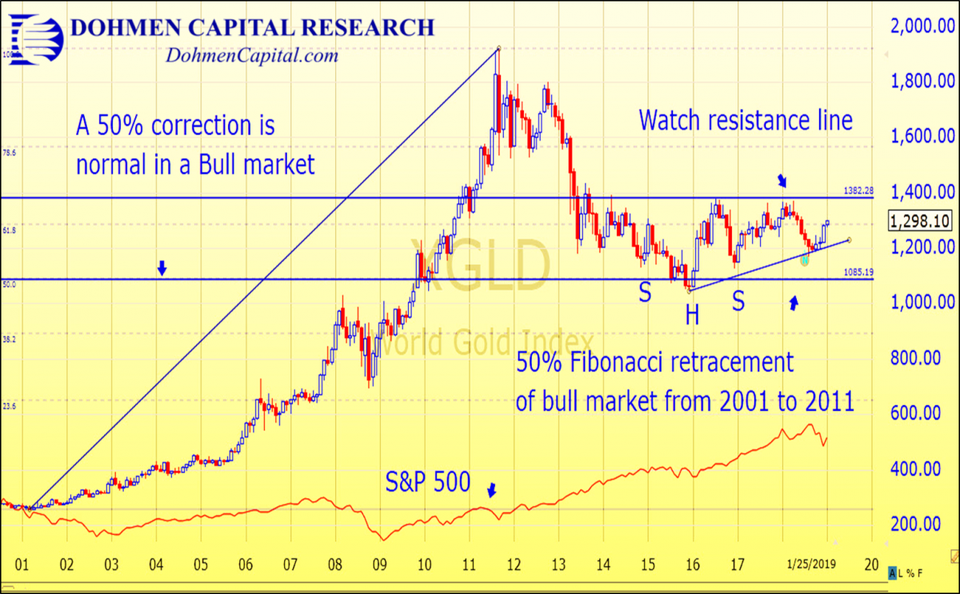 Long-time Wellington Letter clients will remember the gold market peak in late 1980. The price of gold had soared above $800 in 1980. Many analysts were forecasting a rise to $3,000. I predicted a 20-year bear market in gold in the Wellington Letter in 1981 based on my cycle analysis. That was greeted with universal disbelief. But it happened.

As we now know, the bear market lasted until 2001, exactly 20 years, just as we had forecast in 1981. Usually, cycles are not that precise (see the chart below). 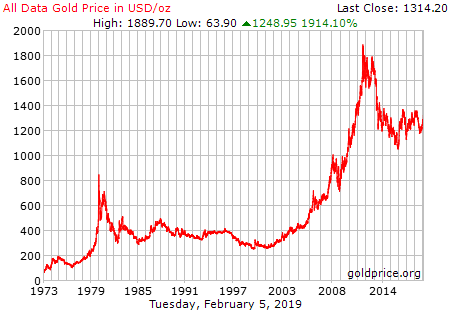 Just as important: The second part of our forecast in 1981 said that according to our very long-term cycle study, that bear market would be followed by a 30-year rise in gold. We even said we had no idea what would cause it, but the cycles said it should happen.

If the forecast I made in 1981 still holds true, gold could have a continued secular bull market until 2030 . That means the gold bull market could have about 11 more years to go. Historically, the final phase of a bull market is the most spectacular.

Of course, cycles can shift to the right or the left, but the bear market cycle was right on target.

Which Company Do We Recommend?

Regal Assets will walk you through and answer all of your questions. They will go over the different options you have and no time pressure you the sale or tried to direct you into anything. Their style is customer come first and foremost. They will also take the time to educate you on precious metals investing since this is YOUR retirement money. When you call, you will be directed to one accountant representative and he or she will answer every phone call or email from going forward.

Still have questions? Let Regal Assets give you clarity and earn your trust.

As if all that’s not enough, this company is most responsible and trustworthy business practices demonstrated by the A+ rating with the BBB. you’re guaranteed fast, efficient access to any gold you decide to order with a 7-day delivery guarantee as well.

We’ve done an extensive Regal Assets Review here… This company is listed #20 on INC 500’s for Financial Services, and a preferred membership with TrustLink.